Inhale Me ~ Let me make you a statistic

With all the hoopla the past few weeks over Demi Moore passing out and having a seizure after inhaling whippets, you might wonder why suddenly everyone is so concerned now that inhalants are so dangerous. As nurses we can tell you that inhalants have been deadly and dangerous for many years, nothing has changed.
What exactly is in a "whippet" ? Lets look at NO(Nitrous Oxide) inhalants and what is in them.
Think its harmless, think again............. 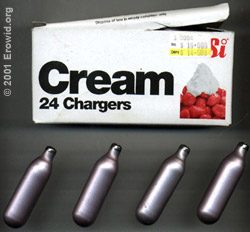 a. Found in whipped cream canisters, whippets.
b. Characterized by distinctive modes of access and settings of abuse.
c. The most serious abuse complication is death via brain anoxia when the pure gas is extensively inhaled.
d. Altered perception and motor coordination caused by nitrous oxide intoxication have been a significant cause of motor vehicle and other accidents.
e. Prominent venous dilatory effects of nitrous oxide inhalation can cause sudden position-related blood pressure changes sufficient to induce syncopal ("blackout") episodes, with potential for serious injury.
f. Chronic abuse, though unusual, can occur. Such abuse may interfere with vitamin B-12 metabolism resulting in neurologic and hematologic complications.
g. Chronic abuse may result in both depression of heart muscular functioning and in cardiac rhythm disturbances.
i. Chronic abuse has also been linked with risk of miscarriage, birth defects, kidney and liver defects.


Health Hazards
Nearly all abused inhalants produce effects similar to anesthetics, which act to slow down the body's functions. When inhaled in sufficient concentrations, inhalants can cause intoxicating effects that can last only a few minutes or several hours if inhalants are taken repeatedly. Initially, users may feel slightly stimulated; with successive inhalations, they may feel less inhibited and less in control; finally, a user can lose consciousness.
Irreversible hazards. Sniffing highly concentrated amounts of the chemicals in solvents or aerosol sprays can directly induce heart failure and death. This is especially common from the abuse of fluorocarbons and butane-type gases. High concentrations of inhalants also cause death from suffocation by displacing oxygen in the lungs and then in the central nervous system so that breathing ceases. Other irreversible effects caused by inhaling specific solvents are: 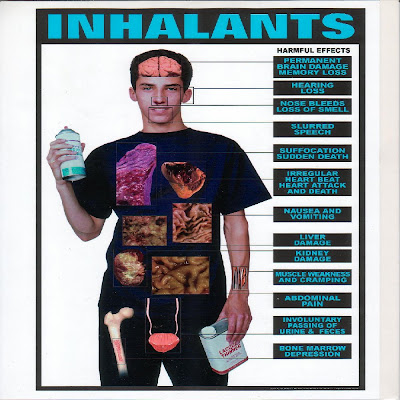 Simple fix.............don't do it
Get help if you do
Educate yourself and others
As a parent, know the signs and know your kid!