A Spoonful of Cinnamon... makes you sick, thats what! 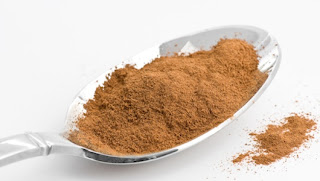 What the heck is the "Cinnamon Challenge" another viral video craze that is all over the internet now, can you die from it? Well you can suffer all sorts of health injuries and problems from this crazy stunt, allergic reactions- anaphyaxis, burns, breathing and airway compromise requiring intubation, just to  name a few...
I posted this on another blog Ed4Ed4all.blogspot.com and felt it needed to be heard by all to help educate parents and teens alike.

Some of the things that people do for attention just astound me, the newest craze called the "Cinnamon challenge" has hit the air waves and social media sites like You Tube. What is so special about cinnamon? it is yummy on my toast with some sugar in moderation, in my cinnamon latte sprinkled on top it is good too. Why on this green earth would you want to take a huge heaping spoon full of the stuff and cram it in your mouth? Subsequently coughing, spewing and spattering the powder all over yourself (how attractive) making a huge mess, and oh yeah not to mention inhaling it into your lungs. I guess you like to be a brown powdered, coughing, vomiting, wheezing , pneumonia-prone mess and then video tape the entire thing to make yourself look like an absolute fool in front of all your friends and many non-friends who just think you are stupid.

Now we have not even talked about the health hazards of the intake of to much cinnamon.  Cinnamon powder can cause allergic reactions and breathing problems, and if it is ingested it can lead to serious burns. Some of these side effects can lead to life-threatening medical emergencies. Cinnamon powder can lead to a bronchial constriction, which can be life threatening. If you suffer from an underlying medical condition that may cause problems with breathing, you should be very careful when handling cinnamon powder.

Allergic reactions---can you say Anaphylaxis which can = DEAD if not treated fast!!

Cinnamon powder can be very dangerous if you accidentally ingest it by mouth. For example, small children who like to play in the cabinets can easily get into the spice cabinet and ingest the cinnamon powder. This can cause severe burning of the mouth and throat and require immediate medical attention. The burning may be so severe that the child can suffer from swelling of the mouth or throat, which can be life threatening.

This article is from CBS News New York:

NEW YORK (CBSNewYork) – A common spice is creating an uncommon problem among teens. It’s called the “cinnamon challenge” and doctors are warning it could be dangerous.

The cinnamon challenge is an old stunt that is making the rounds with a new generation of teens and is popping up all over YouTube and Facebook.

The challenge works like this: A person swallows an entire tablespoon of ground cinnamon without  water, but the results usually end in coughing, choking, gagging, sometimes vomiting and always burning pain.

“It’s dangerous and I never want to have that feeling again,” said one 9th grader, who didn’t want to be identified. She said she was dared to do the challenge last month.

And it’s not just teens who are getting into trouble. New Haven’s Clinton Avenue School principal is on leave, accused of letting  kids in the lunchroom down doses of the spice.

There are no accounts of death by cinnamon, but doctors at Winthrop University Hospital say it’s a dangerous dare. It can raise  blood sugar levels, burn the throat and get into the lungs.

If it gets into your lungs, it can cause asthma or pneumonia,” explained Dr. Joseph Greensher.

A school in Pennsylvania has actually banned some boots because students were smuggling cinnamon into schools that way.

The video above was on Good Morning America and shows just how crazy ingesting spoonful of cinnamon powder is.

Doctors say the challenge is impossible because the cinnamon cannot be digested without water and warn that by inhaling the cinnamon dust teens run the risk of inflaming or scarring their lungs.

“If you have some fine particles, like cinnamon in your lungs, it may be hard to clear out,” said Dr. Robert Zaid of Providence Hospital in Mobile, Ala.  ”Your lungs can kind of collapse on you. There have been several cases reported where kids needed ventilator support because they weren’t able to maintain their airway.”

Dejah Reed, a freshman at Huron High School in Ann Arbor, Mich., spent four days in the hospital with an infection and a collapsed right lung after she ingested cinnamon two week ago.

“She was going in and out of consciousness. She couldn’t breathe. She was turning pale,” her father, Fred Reed, told local affiliate WXYZ. “I hope parents and kids learn that it’s not fun and games. She could have died.”

Even a site devoted to the challenge, Cinnamonchallenge.com, has this disclaimer prominently displayed on its homepage, “DO NOT ATTEMPT THE CINNAMON CHALLENGE WITHOUT TALKING WITH A DOCTOR.  OBVIOUSLY THEY ARE GOING TO TELL YOU NOT TO DO IT. THE CINNAMON CHALLENGE CAN BE DANGEROUS AND SHOULDN’T BE TAKEN LIGHTLY. YOU NEVER WANT TO PURPOSELY OR MISTAKINGLY INHALE ANY SUBSTANCES SUCH AS CINNAMON. IT’S GOING TO BURN, YOU ARE GOING TO COUGH, AND REGRET YOU TRIED…SO WATCH MOVIES OF PEOPLE ALREADY FEELING THE PAIN.”

Despite the serious health risks the game has been popularized by athletes and even a politician.

In November, during the NBA lockout, basketball stars Nick Young and JaVale McGee attempted the cinnamon challenge in a YouTube video that has been viewed more than 100,000 times and posted on ESPN.com.  In February Illinois Gov. Pat Quinn took the challenge while appearing on a talk radio show, though he drank water to get it down.

Boo to you guys, basketball stars and a Governor acting so stupid, thank you for letting down my children and showing them that people in the public eye that are supposed to be responsible and show some kind of smarts at least are just as stupid as the rest of the dummies out there.

Please be smart and don't do something just because its viral on the internet and "everybody else is doing is momma" well if you fall for that old trick, you are just as stupid as they are and you will suffer the consequences also.

Be safe and be smart, show the world that you are #1 , you have a brain, use it!

ED nurses and doctors be on the look for this crazy problem, kids or college students with brown powder all over them in respiratory distress may have lower blood sugar levels, allergic reactions- anaphylaxis , burns to mouth and throat, require intubation due to swelling of the airways and trauma to the throat and airways due to burns and allergic reactions.