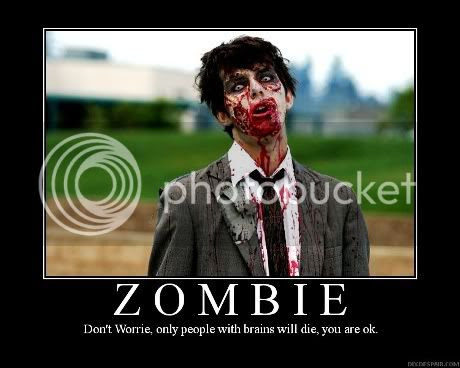 Cannibals on the loose? End of the world? What do you think? With all the recent news stories concerning "whacko's on the loose"eating human eyeballs out of unsuspecting victims heads, chewing faces off and other assorted craziness, it makes you wonder. What the heck is going on?

One explanation can be found in this article by Author Carole De Tosti Phd via Technorati. Posted May 30th 2012:

"Bath salts" the code name in teen-speak for the trending designer drug that has been touted as the new LSD once again is in the news, this time in Miami. The crime that took place on Saturday, the 26th of May shocked South Florida. A naked man was shot by Miami Police on the MacArthur Causeway. He was eating another naked man's face.There is growing fear that the "zombie-like" attack was caused by the dangerous white powder. (The U.S. Drug Enforcement Administration (DEA) made illegal the possession and sale of three of the chemicals commonly used to make bath salts — the synthetic stimulants mephedrone, MDPV, and methylone.) Armando Aguilar, the president of the Miami Fraternal Order of Police thinks the cannibal attack by 31-year-old Rudy Eugene was caused by "bath salts," which go under fanciful names like Vanilla Sky, Ivory Wave, White China, Dynamite and Cloud 9 and can be purchased in jars and packets in tobacco shops or paraphernalia shops in malls.

Jackson Memorial Hospital Emergency room doctors echoed Aguilar saying they have seen a major increase in incidents linked to methylenedioxypyrovalerone. According to emergency room Dr. Paul Adams, "We noticed an increase probably after Ultra Fest." "Bath salts" are more deadly than meth or coke because the drug chemists and their purveyors use loopholes in the law to get around the DEA ban by tweaking the chemicals used to create the drug. Short-term effects include very severe paranoia that can sometimes cause users to harm themselves or others.

Effects reported to Poison Control Centers include suicidal thoughts, agitation, combative/violent behavior, confusion, hallucinations/psychosis, increased heart rate, hypertension, chest pain, death or serious injury. It takes 15 minutes for the drug to take effect and 4-6 hours for it to wear off. The powder is usually ingested by sniffing/snorting and can also be taken orally, smoked, or put into a solution and injected into veins. Dr. Adams of Jackson Memorial Hospital noted that the "bath salts" user’s temperature rises to an extremely high level and they become very aggressive, sometimes using their jaws as a weapon during attacks. The patients are often delirious. Dr. Adams gave an example of one case to illustrate. “Extremely strong, I took care of a 150 pound individual who you would have thought he was 250 pounds. It took six security officers to restrain the individual.” Adams continued, relating that the powerful strength and violence of patients on “bath salts”  threatens those charged with the task of assisting those high on the drug.

The chemical manufacturers are following the FDA guidelines by labeling bath salts as "not fit for human consumption," but that labeling effect is disastrous: reverse psychology marketing to the young and/or adventurous looking for a new thrill. The element of danger is a come on. Though users may only inhale the toxins once or twice, the fear is that they may have recurrent episodes. Officials have pointed out that the substance creates a "ticking time bomb" and in a number of instances, users have committed suicide in the throes of a flashback.

Now there is this incident of zombie cannibalism to add to the horrors of the designer drug's impact. Police reported that Eugene, who was growling like an animal as he swallowed pieces of the 61-year old homeless victim's flesh, was ordered to stop but refused. He continued to tear off and eat the man's ears, nose and cheeks, when police shot him six times. The initial rounds that hit Eugene had little effect as he ate and even tried to gouge out the man's eyeballs. The victim, who is clinging to life in intensive care, is barely recognizable as human, according to reports. Zane Horowitz, MD, an emergency room physician and medical director of the Oregon Poison Center thinks, "Drug makers will keep creating new combinations" of designer drugs "at home and in illicit labs"...because "drugs like these are new and below the radar, unlike named illegal drugs." If "bath salts" are made illegal, other drugs will be created. That is not a good argument to avoid putting a nationwide ban on these chemicals permanently. The lag time needed to create new chemical combinations may stave off the creation of ticking time bombs like Rudy Eugene. A ban will save lives.The sooner the permanent ban, the more likely that events like this zombie-cannibal attack will be avoided.

Even the puppies are doing it~~ Beware~~ had to add that, way to cute! 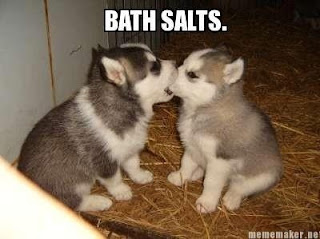