The Rest of the story... 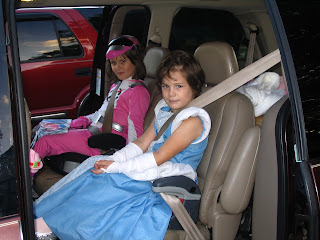 As I promised from the previous post....
The rest of my story is another
reason why I am so passionate about the prevention of injury and share my passion with others whenever possible.
One lovely sunny Monday afternoon a couple of years ago, my youngest daughter and I got into the van and started on our daily journey to pick up the other 2 kids at school (this was before we started homeschooling). My hubby had just left our house a few minutes ahead of us in his 18 wheeler, headed for the mid-west for several days. He was driving a truck long distance then. I turned left onto the same road that we traveled daily,only seconds from our house, rounded a curve and started down the hill when I spotted a very large RV bus that was just about to turn into the RV dealership on that same road. I just knew that he would not pull out, he had no time to turn. I was so wrong, I watched with slow motion horror as that big RV pulled right out in front of my van. I was going about 45 mph (the speed limit) when I had to attempt to slam on my brakes, but went straight into the side of that bus. I remember that the van hit so hard that the rear end almost rose higher than the bus and flipped over. Everything in the van was thrown forward, including the extra booster seat that my other daughter would ride home from school in. As the van came down to a complete stop, all I could think about was my youngest daughter in her booster seat just behind my seat. All I heard was silence then a blood curdling scream out of her small body,she was so scared. I could barely get myself up and out of the van and run around to her seat, I had to get to her no matter what. I picked her up and made a quick once over to check for any obvious injuries. Not even a scratch was on her little body, her booster seat and the seat belt had done their jobs well. I was covered in bruises and abrasions from the seat belt and the airbag that deployed. But we were alive!! and that was all that mattered. Without the seat belts and the airbag I truly believe that both of us would have died that day, the impact of that crash would have thrown both of us out of the van and into the side of that bus. Hard to survive that mechanism of injury as I have seen many times before as an ER nurse.
The driver of the van only had one thing to say........"I thought I could make it" well he thought wrong and could have killed somebody with that poor choice. Thank goodness his bus was empty
that day, my van made a huge dent in the side where an elderly resident would have been seated.
In my next post, I will tell you the story of a little princess and her booster seat, the very same little princess that was with me that day in this crash.
Until then, be safe and always remember to buckle up and pay attention to the road. PLEASE!
You just never know when someone making poor choices will cross your path.