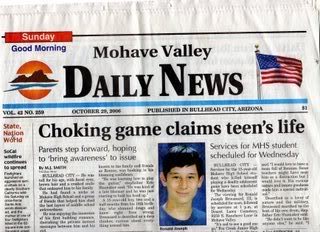 I hope your answer to the above question is NO!!

This is not just a stupid kids game? This is a fatal choice to many children and teens, what choice will you make...Life or Death?

The choking game is a dangerous activity that older children and early adolescents sometimes play to get a brief high. They either choke each other or use a noose to choke themselves. After just a short time, children can pass out, which may lead to serious injury or even death from hanging or strangulation.

What is the choking game?

The choking game is a dangerous activity that older children and early adolescents sometimes play to get a brief high. They either choke each other or use a noose to choke themselves. After just a short time, children can pass out, which may lead to serious injury or even death from hanging or strangulation.

Who is most at risk for death from playing the choking game?

Parents, educators, health-care providers, or peers may observe any of the following signs that can indicate a child has been involved in the choking game:
• Discussion of the game or its aliases
• Bloodshot eyes
• Marks on the neck
• Wearing high-necked shirts, even in warm weather
• Frequent, severe headaches
• Disorientation after spending time alone
• Increased and uncharacteristic irritability or hostility
• Ropes, scarves, and belts tied to bedroom furniture or doorknobs or found knotted on the floor
• The unexplained presence of dog leashes, choke collars, bungee cords, etc.
• Petechiae (pinpoint bleeding spots) under the skin of the face, especially the eyelids, or the conjunctiva (the lining of the eyelids and eyes)

What are some of the other names used for the choking game?

How quickly can someone die after playing the choking game?
Someone can become unconscious in a matter of seconds. Within three minutes of continued strangulation (i.e., hanging), basic functions such as memory, balance, and the central nervous system start to fail. Death occurs shortly after.

Are there non-fatal, long-term consequences of the choking game?
• Loss of consciousness and death of brain cells due to oxygen deprivation in the brain; coma and seizures may occur in severe cases
• Concussions or broken bones (including jaws) from falls associated with the choking game
• Hemorrhages of the eye

How can the choking game be prevented?
Research is not available on the best strateges to prevent the choking game. However, parents, educators, and health-care providers should be made aware of this public health threat and the warning signs that adolescents may be playing the game.
(above information copied from the CDC website)