Why not get protection from the flu?

Simple protection from a potentially deadly problem, a flu shot every year is all that it takes. Yet so many people make excuses not to get one, I used to be one of those people even as a healthcare worker,and I got the vaccine for free for Pete's sake. I would make up every excuse under the sun to avoid getting a "shot" , such a baby, until I actually got the flu and was so miserably sick I could not move. I did some reading myself, educated myself about the flu types, causes, vaccines and potential effects if not vaccinated and I was quickly sold on the fact that I was being crazy not to vaccinate myself as a healthcare worker and endangering my patients also. I have never gotten the flu from a flu shot, not possible, it is not the live vaccine you are getting unless you get the nasal spray.

I read a good article today via NBCNews vital signs that talked about how the number of people in the US getting the influenza vaccine has declined, so we will no have many more very ill patients to treat this year I guess? Below is excerpts of that article.

“Influenza is five times more likely to cause severe illness in pregnant women than women who are not pregnant,” said Dr. Laura Riley of Massachusetts General Hospital in Boston and the American College of Obstetrics and Gynecology.

Even though doctors have been stressing for years that flu vaccines cannot give people the flu, a full quarter of the pregnant women who refused the vaccine said they believed it would infect them. Another 13 percent thought their babies were at risk.

“Pregnant women worry about everything,” Riley said. “We spend a lot of time in this country talking about you can’t eat this, you can’t eat that. It takes us a little while to get the message out about how efficacious (the vaccine) is. We are preventing a very severe disease potentially and we are protecting your baby.” Vaccination does not raise the risk of miscarriages or birth defects.

Flu may be off many people’s radar because the last two years haven’t been especially bad, and because the 2009 H1N1 swine flu pandemic didn’t turn out to be as bad an initially feared.

Yet, 1,300 children died from H1N1 that year and about 100 U.S. children die every year from flu, half of them previously perfectly healthy, CDC says. The CDC estimates that anywhere between 3,000 to 49,000 people a year die from flu in the United States. A lot depends on the strains circulating.

“Flu is unpredictable. Just because we got off easy last season does not mean we will get off easy this season,” Riley said.

The other group that should have 100 percent vaccination is health care workers. The CDC data show that more than 86 percent of physicians are vaccinated, followed by more than three-quarters of nurses. But the numbers plummet to just half of workers in long-term care facilities, where patients are especially vulnerable to flu.

“I believe that the immunization of the health care provider community is both an ethical and professional responsibility,” said Dr. William Schaffner of Vanderbilt University in Nashville and the National Foundation for Infectious Diseases. “It’s a patient safety issue so that we do not transmit our influenza infection. When an outbreak strikes, we need to be vertical, not horizontal.

As with the pregnant women, health workers were more likely to get vaccinated if it was easy for them. More than 78 percent of health care workers got immunized if free vaccine was made available for several days at work. And 21 percent of the health workers said getting flu vaccine was now a condition of employment. More employers should consider making it a requirement, said Litjen Tan of the American Medical Association.

This year, 135 million doses of flu vaccine will be available to the U.S. market. People can get vaccinated at pharmacies, at big-box stores, grocery stores, doctor’s offices and often at their places of employment. Most private insurance companies and Medicare pay for the whole cost of the vaccine.

And while the vaccines are not specifically formulated to protect against some new flu strains that a few people have caught from pigs, they may offer some help, health officials said.

So far, the three new variants identified this year -- H3n2v (the little v stands for “variant”), H1N1v and H1N2v -- don’t spread easily from person to person. Almost everyone infected has been close to pigs. One person has died from the new H3N2v virus, but everyone else has recovered. The CDC’s Dr. Daniel Jernigan says people alive in the 1990s have some immunity to the H3N2 version, and the new H1N1v is close to the strain that the current vaccine targets, although the protection is not perfect.

Please protect yourself and your loved ones, most of all our unborn babies and get your flu vaccine this year I am! 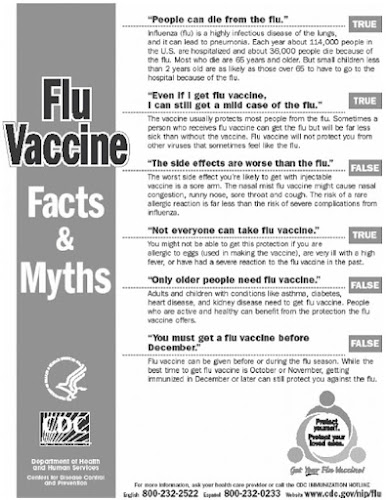