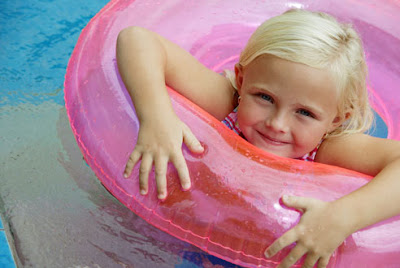 The Virginia Graeme Baker Pool and Spa Safety Act was enacted by Congress and signed by President Bush on December 19, 2007. It was enacted to prevent the tragic and hidden hazard of drain entrapments and eviscerations in pools and spas. The law became effective on December 19, 2008.The VGB Act established a federal swimming pool and spa drain cover standard to ensure pools are equipped with the proper devices. Under the law, all public pools and spas must have ASME/ANSI A112.19.8-2007 compliant drain covers installed and a second anti-entrapment system installed, when there is only a single main drain (other than an unblockable drain) or multiple main drains less than 3 feet apart.
The CPSC is focusing on the pools and spas that pose the greatest risk of entrapment (especially those with single main drain systems and flat drain grates):Public Wading pools Kiddie pools In ground spas.
Here are some ways to help prevent drownings:
Supervise your children at all times
Learn how to swim and teach your children how
Learn CPR
Watch out for drains and suction outlets
Create barriers around your pool or spa
Install a telephone near your pool along with door alarms and pool covers

Each year many American families encounter pool tragedies – drowning and submersion incidents. These tragedies are preventable.In May 2009 the Commission released a report related to pool and spa submersion incidents involving children under 5.
Each year there are nearly 300 reported drownings involving children younger than five years old.
Each year there are about 3,000 emergency room-treated submersion injuries to children younger than five years old.
In addition, there have been 83 reported entrapment incidents reported to the CPSC from 1999 through 2008. Among these are eleven fatality reports, including the accident that ended Virginia Graeme Baker's life in 2002.CPSC staff began investigating reported incidents of pool/spa suction entrapment in the 1970s. Figures from 1999 through 2008 include:83 reported entrapments 11 fatality reports (7 residential, 4 public) 69 injury reports (38 residential, 21 public, 10 unknown location) 3 no injury reports (residential)
Types of entrapment:
Hair
Body
Limb
Evisceration/disembowelment
Mechanical: Jewelry, bathing suits